The Bhutanese Tsehechu festival is associated with religious ceremonies that are centuries old and are intended to transmit the dharma. Festivals are primarily organized for people to pay their respects to the creator/founder and they are a time for people to supplicate for good health and to gain merit for the next life. Festivals are held annually in most of the dzongs and monasteries in Bhutan.

Historically the Tschechu was introduced in Bhutan by the 2nd Buddha, Padmasambhava in the 8th century.  To subdue a local deity, Shelgin Karpo, in Bumthang, Padmasambhava performed eight manifestation dances (Guru Tsegay) which helped him subdue the deity and it also restored the life force of the dying king.  The practice of Tschechu has been performed ever since and has been encouraged by various Buddhist masters including, Terton Dorji Lingpa (1346-1405) and Terton Pemalingpa (1450-1521) who played a major role in Bhutanese history as profounder of various dances.

During a festival, all ritual dances are performed by Monks and lay people.  They wear different masks and costumes which depict god, goddess and other deities that have been seen in the pure visions of the accomplished Buddhist masters. Today Tshechu is observed as a reminder to all people: how they should live their lives, how to conduct themselves as an individual member of society, and how to work together for the benefit of all beings.

Most festivals in Bhutan take place in autumn and spring, with only a few occurring during winter. Typically, you see similar mask dances at each festival.  However, most dzongs have one or two unique mask dances that originate in their region. Each dance has a particular meaning and importance to the people of Bhutan.

Here are some of the more popular Tschechu in Bhutan. Among others I will be discussing a popular festival celebrated in Bhutan and how it is different from other festivals.

The Paro Festival (Paro Tshechu) is one of the biggest and most popular festivals in Bhutan. The Tshechu holds religious significance and is held to commemorate the birth anniversary of Guru Rimpoche, the patron saint of Bhutan who introduced Tantric Buddhism in Bhutan. The majority of the festival is held in the magnificent Ringpung Dzong courtyard and includes colorful mask dances and traditional folk songs.  The event is attended by even more colorfully dressed Bhutanese people. As per the Lunar calendar, the Paro Festival falls during the Spring.  The 2021 festival is scheduled from March 24-28 which corresponds to the 2nd month in the Bhutanese calendar.

The first day of the Paro festival is normally held inside Ringpung Dzong to offer prayers to invoke local deities. The rest of the event is typically held on the open ground next to Ringpung Dzong.  As a stunning finale, the festival concludes with the unfurling of a giant Thongdrol, the largest form of thangka painting, in the early hours before the sunrise, which is then folded back, and Wang or blessings are provided to the public.

The mask dances are colorful and stunning.  Many of the dances are the same as at other festivals in Bhutan, but the sequences vary.  Between mask dances, there is often folk singing and dancing to entertain the general public.  You will also be introduced to the Atsara, an agent of mirth and merriment, the red-faced comical characters are generally thought of as clowns, wielding phalluses at tshechu festivals.

The Paro festival or Tshechu has become an annual event after Zhabdrung Ngawang Namgyel and Ponpo Rigzin Nyingpo the consecration of the Paro Dzong in 1646.
For inquiries check out our pre-published itinerary Paro festival.

The Jambay Lhakhang Drup, in Bumthang, is one of the interesting festivals in the country. The fire ritual and the naked dances are the festival’s highlights and a renowned exhibition among the spectators. The five-day annual event was first instituted as a consecration ceremony by Terchen Dorje Lingpa some seven hundred years ago after he renovated the Jambay Lhakhang. Currently, the descendants of Chakhar Lam and neighboring villages of the monastery carry out the 14th-century tradition.

Annually thousands gather at the monastery to witness the dance. Before the Mewang, several mask dances are performed within the monastery’s campus. A ritual (Gegtrey) to purify the place and cleanse the spectators of their misdeeds is also conducted. Next is the much-anticipated fire ritual. It is performed in a nearby agricultural field. A gate-like structure covered with leaves is set on fire as monks start conducting the ritual. Spectators run through the burning gate which is said to relieve them of their sins and evil.

At the Jambay Lhakhang Drub, rituals such as Mewang, Jyensig, and Torjab are performed to ensure peace and harmony in the country. The fire ritual is then followed by several mask dances in the monastery’s courtyard. The last event is the Tercham or the naked dance. A group of about fifteen men whose faces are wrapped in white clothing, but otherwise stark-naked, take center stage.

For inquiries check out our pre-published itinerary, the Jambay Lhakhang festival.

The Punakha festival (Punakha Tshechu) is held in the beautiful Punakha Dzong’s courtyard. Until 2005 only Drupchen, a meditation retreat was celebrated as the annual festival. District residents requested that the Central Monk body institute Tshechu.  So now, the festival lasts for 6 days, 3 days of Drupchen and 3 days of Tshechu.  The 2021 festival is scheduled for February 19-24.

Drupchen showcased to honor a brief history on the construction of Punakha Dzong, the internal conflict and external invasion during the construction of the fortress by the Zhabdrung Ngawang Namgyel in 1637, and the victory of Drukpa.  The battle scenes are performed by the local militiamen (pazaps) dressed in the battle gear of those ancient times.  The Tshechu is celebrated from the 4th day and includes various mask dances that are performed to entertain the public. The unfurling of the thongdrol (a large tapestry) of Guru Rinpoche is the main attraction of the Tshechu. Whereby masses come to watch, enjoy and pay their respects. In addition to being a fun and exciting day for the Bhutanese, the tshechu also provides devout Buddhists with an opportunity for pilgrimage and prayer.

For inquiries check out our pre-published itinerary, the Punakha festival.

The Thimphu Dromche and Thimphu Tshechu is one of the biggest events in the country. The Festival was first initiated by the 4th Desi, Gyalse Tenzin Rabgay in 1867. At the time, the Tshechu consisted of only a few dances performed strictly by monks. Later, in the 1950s, the Third King Jigme Dorji Wangchuck introduced several mask dances performed by lay monks that added color and variation to the festival without compromising its spiritual significance. The Thimphu Drubchen is held 3 days before the Tshechu in the Tashichho Dzong courtyard. Thousands of people travel to the capital city and offer prayers and rituals to invoke the gods, primarily the country’s protective deity Pelden Lhamo. During Tshechu, various mask dances (Cham) are performed by monks as well as members of the Royal Performing Arts. The mask dances include the Guru Tshengye (Eight Manifestations of Guru), Shaw Shachi (Dance of the Stags). These two dances are particularly popular because they resemble stage-theater. Short skits are also performed to spread health and social awareness messages to the general public.

For inquiries check out our pre-published itinerary, the Thimphu festival.

The Druk Wangyel Lhakhang festival (Dochula Tshechu) is located at Dochula Pass (3100m) opposite the 108 Dochula stupa. The stupa was built in 2004 to pay respects to the 4th King for his victory against the Indian separatist who had settled on Bhutanese soil in 2003.  Later, the temple was constructed under the patronage of Ashi Dorji Wangmo Wangchuck, the eldest queen mother, for a memorial to celebrate the 100 years of monarchy in Bhutan.  It was completed in 2008.  Subsequently, the festival began in 2011 under the guidance of Dasho Karma Ura.  This festival is unique because it is an exciting repertoire of mask dances that includes military and religious themes.  All dances are performed by the Royal Bhutan Army rather than monks or laypeople, as a tribute to the wise leadership of His Majesty Jigme Singye Wangchuck, the Fourth King of Bhutan. It also celebrates the continuous efforts of the Royal Bhutan Army in protecting the sovereignty and the stability of the country. This one of a kind tshechu is performed against the backdrop of the magnificent Himalayan mountain range.

This one-day Tshechu is held annually on December 13 and showcases numerous Buddhist mask dances and folk dances. Among other dances, public attractions are the dance of Gadpo and Ganmo, Milarepa and Tsheringchednga, and the dance of the Heroes. This is the only winter festival held in Bhutan.

For inquiries check out our pre-published itinerary, the Dochula festival.

For locals, Tsechu is a time to socialize, to entertain, to receive blessings and wash away their sins. Bhutanese believe they accumulate merit simply by attending and witnessing the sacred mask dances at the Tsechus, and that their misfortunes will be removed by the power and blessings that the masked dances bring.  The dances re-enact significant spiritual events from the past and are mostly performed by monks in brilliant costumes. They take the roles of wrathful and compassionate deities, heroes, demons, and animals and are accompanied by blaring horns, booming drums, and clashing cymbals as they whirl and leap around the temple courtyard. Filled with color and symbolism, these events are incredible opportunities to become part of the local community. If one watches with sincere faith, devotion, and pure perception, it is believed that your temporary and ultimate illnesses, negative influences, and obstacles will be appeased, and that you will enjoy good health, long life, and the fulfillment of your wishes and aims. 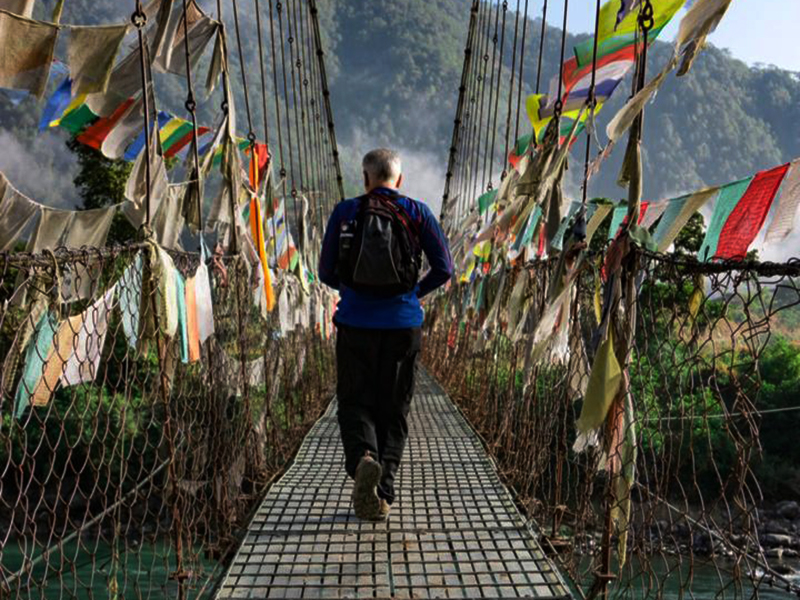 Horse riding in Gangtey-Are you ready? 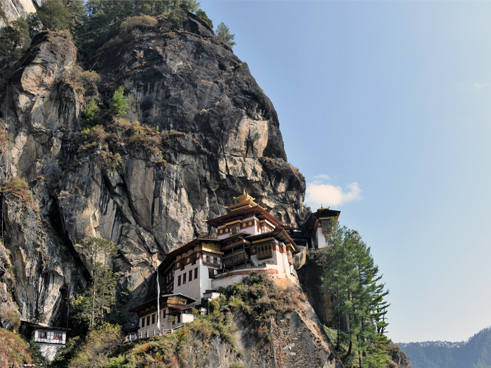 Choosing When to Visit Bhutan